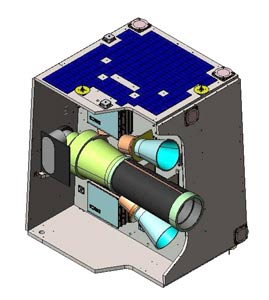 Sapphire is a key element of the Canadian Space Surveillance System, and will be a contributing sensor to the US Space Surveillance Network. It is a space-based electrooptical sensor that will provide accurate and timely tracking data to the Canadian Department of National Defence (DND) on manmade and natural objects in medium to high Earth orbits at orbit altitudes between 6,000 km and 40,000 km. The data collected will be processed by a ground-based system and the results will be used to update the U.S. Satellite Catalogue that is used by both NORAD and Canada to provide space situational awareness.

Canada's Department of National Defence (DND) awarded MacDonald, Dettwiler and Associates Ltd. (MDA) in October 2007 a contract to deliver an information solution called Sapphire for the surveillance of space objects. Sapphire is DND's first dedicated space mission and will support Canada's NORAD commitments with the delivery of critical information.

MDA will lead a team comprised of COMDEV of Cambridge, Ontario, and SSTL of Surrey, England. The four-year contract has the potential for a future extension for mission support, operations, and maintenance. It follows a design phase previously awarded to MDA.

Sapphire will use a small Three Mirror Anastigmat (TMA) telescope similar in design to the Space Based Visible sensor on the US MSX satellite. The optical sensor will consist of a 15 cm telescope and will have a 1.4 deg field of view to observe man-made objects in deep space (6,000 – 40,000 km altitude). The satellite will be in a sun-synchronous, dawn-dusk orbit. The satellite's telescope will point away from the sun so it can observe objects with an aspect that provides the maximum amount of reflected sunlight (best possible phase angle).

The ideal orbit for a space-based space surveillance sensor such as Sapphire is a sun-synchronous orbit at an altitude of approximately 750 km, and a Local Time of Ascending Node of 06:00.