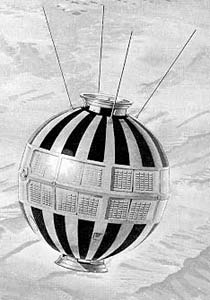 The Italian-built San Marco 3 was a cooperative space effort between the Italian Space Commission (CRS) and NASA. The primary objectives of the mission were

A secondary objective was to determine the neutral density by using three independent measuring techniques. The spacecraft was a 75-cm-diameter sphere. Four 48-cm antennas protruded from the top of the sphere, for command and telemetry transmission. The structure of the spacecraft formed an integral part of the drag balance experiment. A light, external, outer shell was connected by a series of elastic arms to a heavier internal framework. Thus, from changes in the flexible arms connecting the two structures, atmospheric drag (and therefore density) was determined. Other onboard experiments included an omegatron mass spectrometer that directly measured the density and temperature of molecular nitrogen and a Neutral Atmospheric Composition Experiment (NACE) that directly measured the density of the molecular nitrogen, molecular oxygen, atomic oxygen, argon, and helium. Unlike the earlier San Marco spacecraft, San Marco 3 employed an attitude control system, and a spin rate control system. In addition, solar panels were mounted equatorially on the inner core. The satellite performed normally after launch until vehicle reentry on 28 November 1971.

The Italian-built San Marco 4 spacecraft was part of a cooperative space effort between the Italian Space Commission (CRS) and NASA. The scientific objective of this flight was to measure the diurnal variations of the equatorial neutral thermosphere density, composition, and temperature for correlation with simultaneous Atmospheric Explorer C data. Studies of the physics and dynamics of the lower thermosphere were included. The spacecraft carried