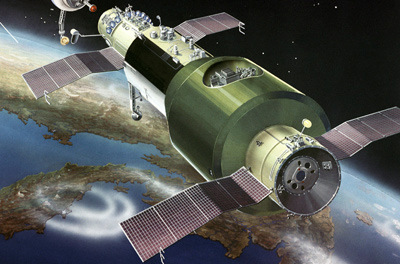 The civilian DOS type space station were derived from the military Almaz (OPS) type station. The station had a launch mass of 18425 kg, measured 20 m in length, 4 m in maximum diameter, and had 99 m³ in interior space. They shared the same pressure hull, but DOS 1 and were fitted with a service module derived from the Soyuz crewed spacecraft. The station featured a transfer compartment, which was equipped with the only docking port. Four Soyuz-type solar arrays provided electrical power. The DOS type station could maintain a crew of three. Also on board was the Orion-1 space observatory, which provided UV spectrometry with the help of a mirror telescope of the Mersenne system and a spectrograph of the Wadsworth system using film sensitive to the far ultraviolet.

Salyut 1 was successfully put into orbit by a Proton-K rocket on 19 April 1971.

The station was first visited on 23 April 1971 by Soyuz 10 with a three man crew consisting of Vladimir Shatalov, Aleksei Yeliseyev and Nikolai Rukavishnikov. The capsule failed to hard-dock due to problems with the Soyuz's autopilot. The mission was aborted after stying soft-docked for about 5.5 hours and the crew returned safely to earth.

The second mission, Soyuz 11, was launched on 7 June 1971 and successfully docked with the station. The three cosmonauts, Georgy Dobrovolsky, Viktor Patsayev and Vladislav Volkov, entered the station. During their stay, they checked out the systems of the station, performed observations of the earth and various experiments. After 23 days, the mission was prematurely ended due to problems of the station. The crew returned back to earth with the Soyuz 11 capsule, but died due to a malfunctioning pressure relief valve, which caused the loss of the cabin atmosphere.

After the Soyuz-11 disaster, Salyut 1 was retained in orbit, hoping that the redesigned Soyuz would become available during its life time, which did not happen. Due to running out of attitude control fuel, it was decided to conclude the station's mission and on 11 October 1971, after 175 days in orbit, the station was deorbited by its main engines, to burn up over the Pacific Ocean.

The second station of this series, DOS 2, which was built as a back-up to the first, was launched in July 1972, but failed to reach orbit.