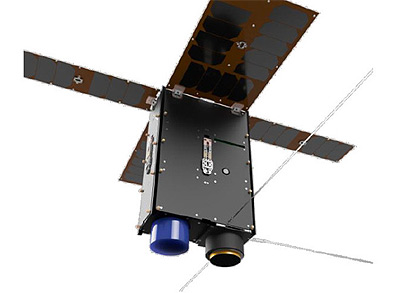 The SAI 2 is a 6U CubeSat technology demonstrator developed by Space AI Inc., San Francisco, to test and operate a prototype spacecraft bus in a space environment, to provide space heritage, and performance feedback for the design.

SAI-2 is a 6U CubeSat. It is intended as a technology demonstrator for advanced communications and supercomputer architectures. Node I is an advanced SDR communications card designed to be used on CubeSats missions. The main purpose is to test the main operational aspects of the card (radios, sensors) and the communication performance in the broad range of operation for the radio, this is why we are requesting several frequency allocations in order to test as much as possible the radio performance, both for Space-to-Earth and Earth-to-Space operations. Also, Space AI will be able to test the Node IO that is a system fully contained in a 0.5U to provide wireless connectivity in a sensor cloud environment.

The satellite, will carry a supercomputer card in order to test different high-computing intensive algorithms under space environment. SAI-2 carry-on Analog Devices AD9375 chips, integrated on the Node I Space AI card. Also, will carry Lime Microsystems LMS6002D inside the Nodes IO. The platform satellite is Space AI integrated solution. The satellite main mission will be to test the Space AI Node I that is an advanced SDR communications card designed to be used on CubeSats missions, also will be attached to a wide band antenna. The other subsystem to be fly will be the MCC supercomputer to test different onboard processing, high intense computing algorithms. The last subsystem will be Node IO that intended to be help the deployment of cloud sensors on ground applications, the primary goal will be to test the system in space environment.