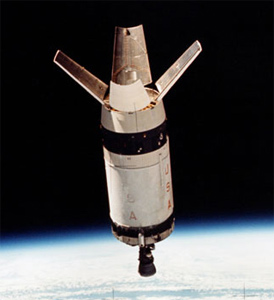 The S150 X-ray experiment was a piggy-back experiment on the Skylab 3 mission, the second crewed mission to Skylab. The objective of this experiment was to extend the search for the origin of galactic x-rays beyond the sensitivity possible with short flights of small research rockets. This was accomplished by placing a large-area, soft x-ray detector in orbit to collect data for a much longer time. The S150 was attached to the inside wall of the instrument unit which was itself mounted atop the Saturn-4B upper stage of the Saturn-1B rocket which orbited briefly behind and below Skylab on 28 July 1973.

After the astronauts had separated their Apollo capsule from the SIV-B stage, the S150 experiment was deployed from its protective housing and activated. The entire SIV-B stage underwent a series of preprogrammed maneuvers, scanning about 1 degree every 15 seconds, to allow the instrument to sweep across selected regions of the sky. The pointing direction was determined during data processing, using the inertial guidance system of the SIV-B stage combined with information from two visible star sensors which formed part of the experiment. Data was stored on a tape recorder and replayed to suitable ground stations when possible.

Galactic X-ray sources were observed with the S150 experiment. The experiment was designed by Kraushaar, Bunner, and collaborators at the University of Wisconsin to detect 40-100 angstrom photons. It consisted of a single large (~ 1500 cm²) proportional counter, electrically divided by fine wire ground planes into separate signal-collecting areas and looking through collimator vanes. The collimators defined three intersecting fields of view (~2 × 20 degrees) on the sky, which allowed source positions to be determined to ~30 arcmin. The front window of the instrument consisted of a 2 micron thick plastic sheet. The counter gas was a mixture of argon and methane.

Analysis of the data from the S150 experiment provided strong evidence that the soft X-ray background cannot be explained as the cumulative effect of many unresolved point sources.