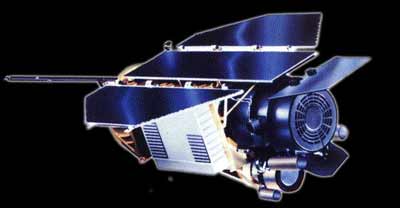 ROSAT (Roentgen Satellit) was an X-ray observatory developed through a cooperative program between the Germany, the United States, and the United Kingdom. The satellite was designed and operated by Germany, and was launched by the United States on 1 June 1990. It was turned off on 12 February 1999.

Power was supplied through three solar panels providing 1 kW of power during Sun-lit parts of the orbit, and through a rechargeable battery during the shadow phase (spacecraft night, up to 40 minutes per orbit).

The scientific payload consists two coaligned scientific experiments, the X-Ray Telescope which is used in conjunection with one of the focal plane instruments:

Wide Field Camera (WFC) is the second experiment, which has its own mirror system and star sensor.

ROSAT provides a ~ 2 degree diameter field of view with the PSPC in the focal plane, and ~40 arcmin diameter field of view with the HRI in the focal plane. The ROSAT mission began with a six-month, all-sky PSPC survey, after which the satellite began a series of pointed observations that will continue for the duration of the project. On September 11, 1994, after four years of successful operation, the PSPC was shut down to conserve the remaining detector gas. This remaining gas was thought to have been used up during 1997 in a series of pointings to complete the all-sky survey coverage, but several other PSPC observations were carried out in 1998 and early 1999.

ROSAT was switched off in February 1999 after 8.5 years of successful operation. On 23 October 2011 ROSAT re-entered the Earth's atmosphere over the Bay of Bengal, east of India. There was concern, that several parts, especially from the optics, might survive reentry. There was no confirmation if pieces of debris had reached the Earth's surface.