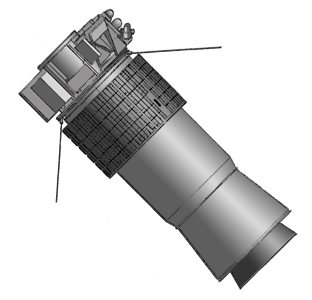 RM 1 (Radiation Meteroid) was a secondary payload on the OFO 1 launch to demonstrate the feasibility and accuracy of an advanced radiation dosimetry system and to verify in-flight improved instrumentation to measure meteoroid impact, flux, direction and speed.

weighed about 21 kg and was approximately 167.6 cm long and 76.2 cm in diameter. It consisted of two cylindrical segments:

There were two experiments on board the RM 1 satellite.

One was a radiation experiment consisting of an advanced radiation dosimetry system designed to measure and determine the type of radiation encountered and to convert the data instantly to conventional radiation dose units. The purpose of this experiment was to demonstrate the feasibility and accuracy of an advanced radiation dosimetry system used to measure and determine the type of radiation encountered in a real time mode. Radiation data were obtained for the South Atlantic magnetic anomaly. Electron and proton pulse-height distributions obtained by a solid-state radiation spectrometer were converted in real-time on board the spacecraft by a flux-to-dose conversion unit. This data was compared to the radiation dose measured simultaneously by a conventional dosimetry system consisting of three ionization chambers, two on which functioned properly. Direct comparison of the two systems was made from the telemetered data. The spectrometers successfully measured the electron pulse-height distribution and were accurate for protons with energies from 43 MeV to 50 MeV. Above 50 MeV, they malfunctioned and indicated an excessive proton flux. The spectrometer data were converted to conventional dose, but they were too high and did not correlate with the ionization chamber measurements. Electrons were measured with incident energies of 300 keV to 5 MeV. The data obtained were usable to develop spectral maps of South Atlantic magnetic anomaly for elecrons and low energy protons.

The other experiment was a meteoroid experiment employing an improved detector system of thin film capacitors to obtain the number of meteoroid impacts and their direction and speed. The purpose of this experiment was to measure meteoroid impact flux for masses greater than 10-14 gm and velocity and direction data for masses greater than 10-12 gm. The detectors were two 8 in by 8 in thin film capacitor sensor planes about three in apart. Each individual sensor was one sq in. The effective area for the two detectors was 80 sq in with the remainder being support structure. Approximately 40 percent of the front plane and 10 percent of the rear plane impact sensors failed during the first three weeks in orbit. Damage was believed to have been caused by air turbulence resulting from premature heat shield ejection and by subsequent rupture of stressed sensors by UV radiant energy. Meteoroids with a mass of 10-14 to 10-12 gm penetrated only the front sensor. Meteoroids with a mass of greater than 10-12 gm penetrated both planes yielding velocity and direction data. The experiment was successful and two measurements were recorded.