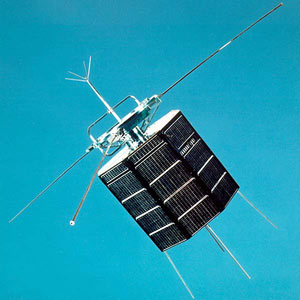 REXS (Radiation Experiments Satellite) or Denpa was a spacecraft with a diameter of 75 cm, an octagonal column form, and a height of 75 cm. Three antennas, each 2 m long, were extended from the main structure. A fluxgate magnetometer sensor was located on the boom 0.5 m from the base. The satellite was spin stabilized at about 3 rps. Power was supplied from 5000 silicon N-P solar cells mounted on the octagonal faces to supply minimum average power of 13 w. Data from experiments were stored in a tape recorder and transmitted from the 136-mHz PCM telemeter by ground command.

The satellite stopped transmitting radio signals several days after launch. Therefore no scientific results were obtained from this mission. The final report concluded that the satellite malfunction was due to high voltage arching that occurred after instrument turn on.