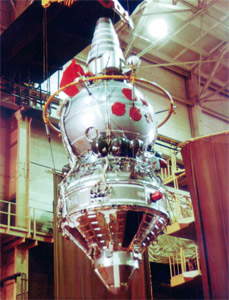 The Resurs-F1M (17F43M) was one of three subseries of the Soviet Resurs-F1 film-return earth observation satellite family. They were a follow-on to the Fram (Zenit-4MKT) series.

The Resurs-F1M satellites were based on the Zenit-4 reconnaisance satellites. They featured a Zenit/Vostok type 2.3 m spherical reentry capsule, which housed the cameras and film, a service module and a orbital maneuvering module. It was battery powered allowing for 14 days of operations, although up to 10 days on stand-by could be added.

The imaging system consisted of a three channel multispectral system that includes three KFA-1000 cameras and one KATE-200 cameras.

The KATE-200 (SA-34) camera with 1000 mm focal lenght provided for Earth survey in three spectral bands. It could collect stereoscopic imagery having an along-track overlap of 20, 60, or 80 percent. Resolution of the images, according to spectral band and survey altitude, varied from 10 to 30 m over a 180 km swath width. One of these cameras was coupled with a SA-33 stellar indexing camera for exact geolocation. The KATE-200 had a capacity of 1200 frames, each 180 mm by 180 mm.

All film frames of both systems were marked with codes to record camera parameters, including camera and frame number, film number, focal length, and timing codes.

Only two Resurs-F1M satellites were flown until electro-optical systems like Resurs-O1 took over.