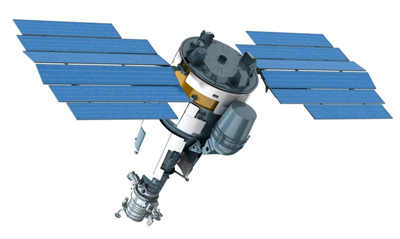 The Russian Resurs-DK 1 (46KS) satellite is mainly designed to image and transmit data on information for Earth natural resources study, data on ecology and emergency, sea surface status, ice situation, meteorological conditions in Earth polar regions, as well as to support digital data exchange between ground users. The satellite is continuously oriented towards the Earth in order to fulfill this program of Earth surface observation.

The spacecraft was built by TsSKB Progress in Samara. It is based on the military Yantar-4KS1M (Neman) imaging satellite.

The additional Russian and Italian 470 kg PAMELA (Payload for AntiMatter Exploration and Light-nuclei Astrophysics) magnet spectrometer, designed to register the fluxes of charged particles and non-stationary phenomena in cosmic ray research, is installed on the side of the satellite. While folded aginst the telescope for launch it is rotated 180° after reaching orbit pointig upwards along the service module.