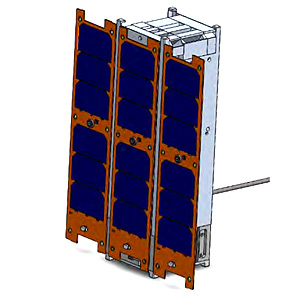 REAL (Relativistic Electron Atmospheric Loss) is a scientific investigation mission conducted by Dartmouth Collegemission designed to characterize the loss of particles from Earths Van Allen radiation belts. REAL will carry an energetic particle instrument that is sensitive to both electrons and protons. From its vantage point in low-Earth orbit, REAL will point its instrument along Earths magnetic field to measure radiation belt particles as they enter the atmosphere.

REAL is built on a 3U CubeSat satellite bus. The REAL particle detector instrument will constitute the top 1/4 U of the 3U REAL spacecraft. Each of the medium- & highenergy apertures resolves a 20° range of electron pitch angles. The first Look-Direction (LD) will be centered on the magnetic field, so it has a 40° Field-of-View (FoV).