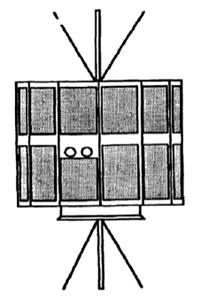 RATE (Radiant Teak Experiment) was a small satellite project of the US Navy to map the RF noise spectrum in low earth orbit at VHF and UHF to provide a database on a diurnal, seasonal and geographic basis. It was part of the Navys Spinsat (Special Purpose Inexpensive Satellite) program. Ardak Corp. and Fairchild were selected in 1988 to build the small satellite.

The data provided by the RATE mission was to aid the development of receiver packages for lightwight satellite systems with adequate signal to noise ratio for error-free data links. Furthermore, the mission was to provide valuable data on ionospheric effects, which cause signal dropout and fading at VHF.

The satellite was designed to be launched either by a Shuttle mission with deployment from a GAS canister or by a Scout-G1 launch vehicle. The Scout vehicle was selected to launch RATE together with PRoFILE in mid year 1991, but project cancellation in 1991 prevented this, although the satellite was nearly completed.

The satellite structure and subsystems were donated to the Naval Postgraduate School for further use.