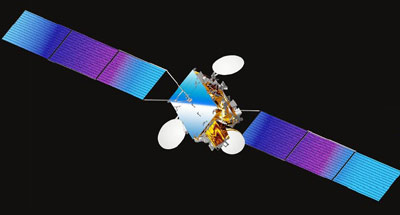 Based on the flight proven Spacebus-4000B3 platform, the RASCOM-QAF 1 high performance, high capacity satellite will provide a pan-African coverage with multiple spot beams based on 12 Ku and 8 C bands transponders. The system's ground networks will include gateway Earth stations and low-cost, solar powered rural terminals.

Alcatel Space will supply both the in-orbit delivered satellite and its associated ground infrastructure including the mission, business, and ground control segments.

After launch, Rascom-QAF 1 suffered a Helium leak in its proulsion system and stayed about a month in the transfer orbit. End of January 2008 it finally reached the geostationary orbit, but had only fuel for a two year life time left.

The replacement RASCOM-QAF 1R was ordered in 2007.