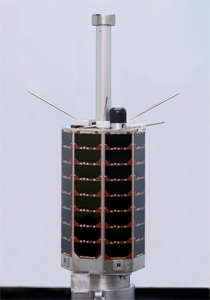 Rasad 1 is an Iranian nanosatellite built by the Malek Ashtar University in Tehran. The 15 kg satellite has an operational life of 2 months and orbits the earth in a height of 260 km. It is an experimental Earth observation satellite with a resolution of about 150 meters. Stabilization is provided by an extendable gravity gradient boom.

In line with research and development plans in space science and technology, on June 15, 2011 a Safir Satellite Launch Vehicle placed the Iranian satellite Rasad-1 into the LEO. Rasad was equipped with body-mounted solar panels to generate power for the batteries, with no limitation in the power source. Stabilization is provided by an extendable gravity gradient boom. It was the countrys first imaging satellite, and was a joint development by the Malek Ashtar Technical University. This 15.3 kg satellite with a life span of 21 days performed its mission successfully, beaming images with 150 m resolution to its receiving station and reentering the atmosphere on July 6, 2011. It was the third Iranian satellite and the second to be orbited using an indigenous launcher.