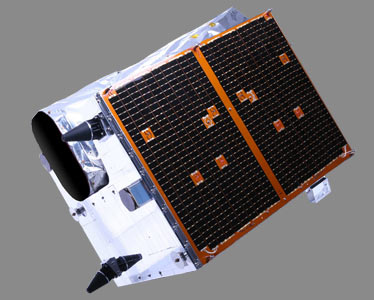 The RapidEye satellite constellation is a dedicated system for commercial Earth observation, consisting of five mini-satellites, which carry a CCD-based imaging system.

The CCD-based earth imaging system (5 spectral bands including visible, red-edge and near infra-red) allows the generation of images of up to 77 km × 1500 km at a resolution of 6.5 meters.

Each satellite has the capability of performing an off-track rotation. The camera's imaging swath of approx. 150 km combined with an off-track angle of ±22° ensures daily accessibility.

The RapidEye Mission was launched in 2008. The five satellites were launched on a single Dnepr vehicle and placed in a common sun-synchronous orbit of 620 km, with the satellites equally spaced about 19 minutes apart in their orbit, ensuring frequent imaging of particular areas of interest. The satellites can be redirected once per orbit through the telemetry, tracking and command unit. A data handling and storage unit is situated onboard each satellite as well as a high-speed X-band communication system. The designed lifetime of these satellites is 7 years.

The Taiwanese Argo satellite was once planned to join the constellation as a sixth satellite, but this cooperation was dissolved.