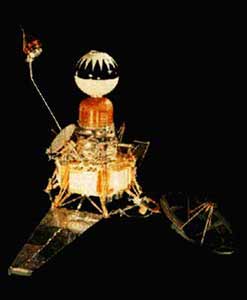 The basic Ranger Block 2 vehicle was 3.1 m high and consisted of a lunar capsule covered with a balsawood impact-limiter, 65 cm in diameter, a mono-propellant mid-course motor, a 5080-pound thrust retrorocket, and a gold- and chrome-plated hexagonal base 1.5 m in diameter. A large high-gain dish antenna was attached to the base. Two wing-like solar panels (5.2 m across) were attached to the base and deployed early in the flight. Power was generated by 8680 solar cells contained in the solar panels which charged a 11.5 kg 1000 W-hour capacity AgZn launching and backup battery. Spacecraft control was provided by a solid-state computer and sequencer and an earth-controlled command system. Attitude control was provided by Sun and Earth sensors, gyroscopes, and pitch and roll jets. The telemetry system aboard the spacecraft consisted of two 960 MHz transmitters, one at 3 W power output and the other at 50 mW power output, the high-gain antenna, and an omni-directional antenna. White paint, gold and chrome plating, and a silvered plastic sheet encasing the retrorocket furnished thermal control.

The seismometer was encased in the lunar capsule along with an amplifier, a 50-milliwatt transmitter, voltage control, a turnstile antenna, and 6 silver-cadmium batteries capable of operating the lunar capsule transmitter for 30 days, all designed to land on the Moon at 130 to 160 km/h. The radar altimeter would be used for reflectivity studies, but was also designed to initiate capsule separation and ignite the retro-rocket.

Ranger 3 was designed to transmit pictures of the lunar surface to Earth stations during a period of 10 minutes of flight prior to impacting on the Moon, to rough-land a seismometer capsule on the Moon, to collect gamma-ray data in flight, to study radar reflectivity of the lunar surface, and to continue testing of the Ranger program for development of lunar and interplanetary spacecraft. The mission was designed to boosted towards the Moon by an Atlas/Agena, undergo one mid-course correction, and impact the lunar surface. At the appropriate altitude the capsule was to separate and the retrorockets ignite to cushion the landing. A malfunction in the booster guidance system resulted in excessive spacecraft speed. Reversed command signals caused the spacecraft to pitch in the wrong direction and the TM antenna to lose earth acquisition, and mid-course correction was not possible. Finally a spurious signal during the terminal maneuver prevented transmission of useful TV pictures. Ranger 3 missed the Moon by approximately 36,800 km on 28 January and is now in a heliocentric orbit. Some useful engineering data were obtained from the flight.

Ranger 4 was designed to boosted towards the Moon by an Atlas-LV3 Agena-B, undergo one mid-course correction, and impact the lunar surface. At the appropriate altitude the capsule was to separate and the retrorockets ignite to cushion the landing. Due to an apparent failure of a timer in the spacecraft's central computer and sequencer following launch the command signals for the extension of the solar panels and the operation of the sun and earth acquisition system were never given. The instrumentation ceased operation after about 10 hours of flight. The spacecraft was tracked by the battery-powered 50 milliwatt transmitter in the lunar landing capsule. Ranger 4 impacted the far side of the Moon (229.3 degrees E, 15.5 degrees S) at 9600 km/hr at 12:49:53 UT on 26 April 1962 after 64 hours of flight.

Ranger 5 was designed to boosted towards the Moon by an Atlas-LV3 Agena-B, undergo one mid-course correction, and impact the lunar surface. At the appropriate altitude the capsule was to separate and the retrorockets ignite to cushion the landing. Due to an unknown malfunction after injection into lunar trajectory from Earth parking orbit, the spacecraft failed to receive power. The batteries ran down after 8 hours, 44 minutes, rendering the spacecraft inoperable. Ranger 5 missed the Moon by 725 km. It is now in a heliocentric orbit. Gamma-ray data were collected for 4 hours prior to the loss of power.