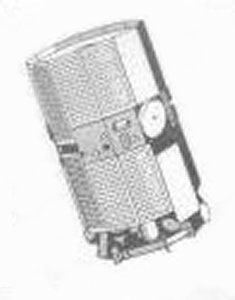 The spin stabilized satellite Radsat was launched by the US Air Force on 2 October 1972 into a noon-midnight, Sun-synchronous orbit. The satellite is sometimes referred to as P72-1. The inclination was 98.4 degrees; the apogee and perigee were 761 and 736 km, respectively. The cylindrical spacecraft was 2.13 m long and 1.37 m in diameter. Antenna booms extended 2.74 m from each end, coincident with the spin axis. The orbital period was 99.5 minutes, and the spin period was 5 s.

The objectives of this spacecraft were to measure background gamma radiation over the whole earth in the 100 to 300 kV range and in the >700 kV range. Fluxes and spectra of low-altitude charged particles were to be measured as a function of time and magnetospheric position. The effects of the space environment on various thermal control coatings were to be determined. Measurements of UV radiation, and H and He atoms and ions were taken. Observation was made of extreme and far UV originating in interaction of solar wind with interplanetary medium or from galactic sources.

The satellite is not expected to decay into the atmosphere until the year 2012. The gamma-ray instrument, however, ceased function after ~7 months.

The gamma-ray detector was a 50 cubic-cm Ge(Li) spectrometer with an active area of 15 cm2. It was cooled by solid CO2. The detector was surrounded by a W collimator and a stainless steel tungsten rear shield, which was in turn surrounded by a 4-pi anticoincidence plastic scintillator. The detector covered the energy range 40 keV.- 2.8 MeV, with 4096 channels. The maximum resolution was ~ 4 keV.(FWHM) at all energies. However, this resolution was short-lived, and during most of the lifetime of the experiment the resolution was between 10 - 50 keV. Data were accumulated in 1 ms time bins during a burst. This instrument represented the first high-resolution germanium spectrometer flown on a satellite.

Several gamma-ray bursts which were also seen by the Vela satellites were seen by Radsat. A ~60 ms microburst was seen prior to the Vela trigger time for the 18 December 1972 event. Furthermore, the spectrum was seen to soften in this event at later times.