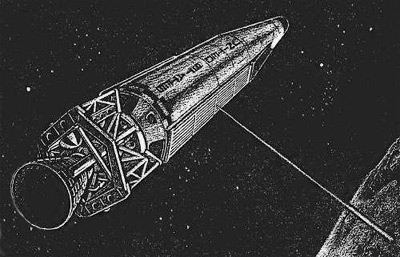 This Quill mission was the first radar reconnaissance sat developed by the NRO in the P-40 synthetic aperture radar (SAR) proof-of-concept program.

It featured a Goodyear built X-band (9.6 GHz) SAR system designated KP-II, which was a modified AN/UPQ-102 pulsed-Doppler system. The 0.6 m× 4.6 m radar antenna was side mounted flush with the satellite body and the Agena-D stage. The data obtained from the payload would be in the form of target echoes which would be synchronously demodulated to preserve both phase and amplitude aspects of the signals. The resulting raw radar map data (a doppler history of the illuminated terrain) would be recorded photographically on film in the recoverable SRV capsule of the same type as in the KH-4 satellites aboard the satellite. Simultaneously, the data signals would be transmitted over the wide-band data link to tracking stations, where they would be recorded both on photographic film and on wide-band magnetic tape recorders. After mission completion, the film record in the satellite would be recovered near Hawaii by air catch of the reentry capsule.

The KP-II radar system, weighing 168 kg, was placed into the cylindrical section. The recorder system, including the cathode ray tube recorder and the film-supply cassette, weighed approximately 45 kg and was housed in the conical section. The reentry capsule, located in the vehicle's nose cone, protected exposed film containing the raw data until it arrived safely back on Earth.

The azimuth resolution was 2.3 m with a slant range resolution of approximately 24 m. The coverage of the mission was approximately 260.000 m2. Nearly 80 percent of the area illuminated produced useful images.

The 1477 kg Quill 1 was launched on 21 December 1964 on a proof-of-concept mission. Because of diplomatic and security concerns the brief mission imaged only selected targets within the United States. Those targets could be inspected on the ground to validate the intelligence value of orbital SAR without alerting the Soviets to the capability or touching off diplomatic protest over active illumination of sovereign territory. Quill's non-rechargeable batteries ran out of power on schedule during orbits 72-73, 26 December 1964. The radar operated fourteen times, imaging large swaths of the northeastern and western United States. Data collected from those fourteen radar passes went to the ground station in view, either Vandenberg or New Boston, over a wideband (UHF) data link in real time. In addition, the onboard film recording system captured data from the first seven radar passes. Technicians developed the film after its 23 December recovery and ran it through the specially made Precision Optical Processor to produce useful images. Quill 1 reentered 11 January 1965 over the South Atlantic.

Although its four day mission was successful, Quill's resolution was not high enough to be a valuable reconnaissance tool.

The second satellite was never launched and put into storage. Later it was cannibalized and the remains destroyed.

The radar principle for acquiring data was only used again in 1978 by NASA's Seasat and by the USAF in the late 80ies by the Lacrosse / Onyx radar satellites.