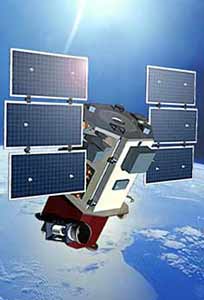 The system collected 61 cm class panchromatic and 2.5 m multispectral stereoscopic data over a large field of regard with rapid target selection. The data contributed to mapping, agricultural and urban planning, weather research and military surveillance.

Originally slated as a 1 m resolution imaging system, plans were modified by the customer, DigitalGlobe of Longmont, Colo., to increase the resolution system by adjusting the orbit in which the satellite is flown. As a result, panchromatic resolution increases from 1 meter to 61 cm and multispectral increases from 4 to 2.5 m resolution.

QuickBird 1 launched on a Kosmos-3M from Plesetsk, but was lost due to launch vehicle failure, when the vehicle failed to circularize its orbit. It reentered still attached to the upper stage. The planned orbit was non-sun-synchronous at 600 km × 600 km, 66°.

QuickBird 2 launched on a Boeing Delta-7320-10C rocket from Vandenberg Air Force Base in California 18 October 2001. QuickBird's launch has resulted in the highest resolution commercial satellite until then. The satellite operates in a 450 km 98° sun-synchronous orbit, with each orbit taking 93.4 minutes.

QuickBird 2 was retired and de-orbited on 27 January 2015 after more than 13 years on orbit.