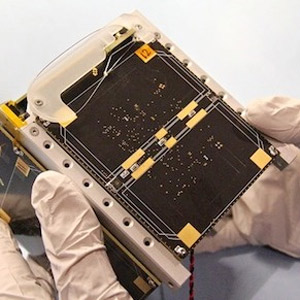 Quest 1 is an educational 1U CubeSat developed by a team of students and faculty at Valley Christian High School's AMSE Institute in partnership with the Quest Institute for Quality Education.

The purpose of the Quest-1 satellite is to:

Quest-1 is built to the 1U CubeSat form factor and features passive attitude control. It uses two transceivers, one on 145 MHz and one on 437 MHz. Both will transmit MCW SSTV & 1200Bd AFSK packet. Also on board are 5 small cameras. The Quest-1 Satellite will have various sensors to monitor and record the local environment. These sensors include the following: one 3-axis gyro, one 3-axis magnetometer, one 3-axis accelerometer, five 2-axis sun sensors, three current sensors, and numerous temperature sensors.

The mission is to take photos of launch from ISS launcher, to take photos of earth and send data and pre-loaded files to earth. Immediately after deployment, the Quest-1 Satellite will measure the tip off rates by recording the outputs from the 3-axis gyros, the 3-axis magnetometer, the five sun sensors, and three power sensors. As commanded from the Valley Christian High School Ground Station, the Quest-1 Satellite will photograph and store selected earth locations using one or all five color digital cameras. One 105° field of view camera is located along the +Z axis, and will be used to take wide angle photos of ISS and the earth. The remaining four 36° cameras are located at each corner of the +Z panel.

The satellite is expected to be launched to the International Space Station during the summer of 2015 and deployed into space by a NanoRacks CubeSat Launcher after successful arrival at the ISS.