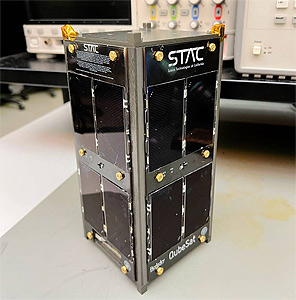 QubeSat is a technology demonstration mission by the University of California, Berkeley, that will test and characterize the effects of space on quantum gyroscopes based on nitrogen-vacancy centers in diamond.

This sensor can be made very small while remaining accurate and can be scaled down to a much smaller form factor. It will increase the attitude determination accuracy of small spacecraft and allow it to maintain its accuracy in a high radiation environment.

The overall goal is to research the effects of space environment on a quantum gyroscope based on Nitrogen-Vacancy (NV) centers in diamond. NV centers in diamond can be used to create gyroscopes, magnetometers, and other sensors. These sensors could support better attitude determination systems for cubesats, including amateur cubesats.

QubeSat will allow members of the student group to engage in satellite operations and learn about satellite communication through design and operation of radio systems.

This mission also aims to grow the community around the OpenLST transceiver, an open-source radio design proven in use by Planet Labs, which is also planned to be flown by several other university CubeSat projects.

The satellite was launched on February 2022 on an Astra Rocket-3.3 but failed to reach orbit.