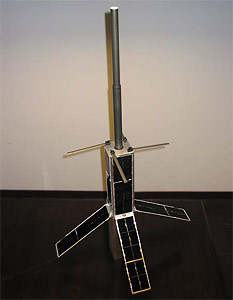 A Palo Alto, Calif.-based start-up is privately funding a mission that it hopes will make earthquake forecasts as common as weather forecasts. QuakeFinder, LCC, a spin-off of Stellar Solutions Inc., also of Palo Alto, launched a very small satellite (3U CubeSat) in 2003. Their QuakeSat 1 scanned the globe for dramatic changes in extremely low frequency electromagnetic (ELF) waves that some scientists believe precede and follow seismic activity.

The 3-kilogram QuakeSat, which was being built by Stanford University students as part of its CubeSat program, covered Earth every four days in a near polar orbit 700-900 kilometers in altitude. QuakeFinder had deployed 25 ground sensors donated to high school students along California faults, but since the mission is global in scale and only designed to last six months to a year, QuakeFinder technicians had to rush to a potential seismic area with ground sensors to confirm the data and gain more precise readings.

QuakeSat features a single axis magnetometer and a small E-field dipole antenna. The objective is the detection of ELF signatures. The ELF sensor is a single axis, search coil (induction) type magnetometer with multiple frequency bands, which is mounted on a telescoping boom.

QuakeSat was designed to operate for one year, but the lasted for 1.5 years to the end of December 2004.

Although QuakeSat-1 successuflly demonstrated the detection of ELF waves from earth quakes, there are no plans to build a QuakeSat-2, partially due to funding limitations, and partly due to the observation that the ELF signals appear to be short-lived pulsations (1-10 sec in duration) that exist for approximately 5-10% of a 24 hr day. A low earth satellite only has visibility over a specific earthquake area for approximately 2-15 minutes per day (less than 1% of the day), so it is statistically difficult to be at the right place when these pulsations occur.