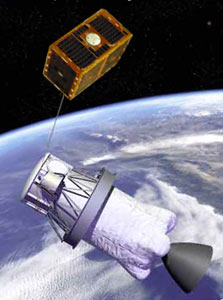 The ProSEDS (Propulsive Small Expendable Deployer System) is a tether-based propulsion experiment that draws power from the space environment around Earth, allowing the transfer of energy from the Earth to the spacecraft.

Inexpensive and reusable, ProSEDS technology has the potential to turn orbiting, in-space tethers into "space tugboats" -- replacing heavy, costly, traditional chemical propulsion and enabling a variety of space-based missions, such as the fuel-free raising and lowering of satellite orbits.

The flight of ProSEDS, scheduled for early in 2003, will mark the first time a tether system is used for propulsion. To be launched from the Cape Canaveral Air Force Station, Fla., ProSEDS will fly aboard an Air Force Delta II rocket and demonstrate an electrodynamic tether's ability to generate significant thrust.

In orbit, ProSEDS will deploy from a Delta-7925 second stage a 3.1-mile-long (5 kilometers), ultra-thin bare-wire tether connected with a 6.2-mile-long (10 kilometers) non-conducting tether. The interaction of the bare-wire tether with the Earth's magnetic field and the ionosphere will produce thrust, thus lowering the altitude of the stage.

Although the mission could last as long as three weeks, the first day is the most critical, because the primary objective of demonstrating thrust with the tether should be achieved during the experiment's first 24 hours.

During the mission profile tests in November of 2001, engineers from the Marshall Center, along with their partners in academia and industry, tested the experiment's multiple systems as if the flight were actually taking place.

During the flight, the process of collecting energy will begin when the electromagnetic portion of the tether collects electrical current along the tether's length as it moves through the Earth's magnetic field. To keep the current flowing, the plasma contactor reconnects the electrons with the invisible, electrically charged plasma that surrounds the Earth, emitting the electrons back into space so it can complete its circuit.

Additional testing of ProSEDS hardware leading to its launch will include thermal testing, tether deployment and final system verification with flight software.

The ProSEDS experiment is managed by the Space Transportation Directorate at the Marshall Center.

The Icarus launch was originally projected for Fall 2000, piggybacking on the GPS IIR-8 satellite launch. Since that time there have been countless delays for a variety of reasons. After the Columbia accident, ProSEDS was bumped from the GPS IIR-9 launch scheduled 29 March 2003. Discussions between the International Space Station office, NASA Headquarters, and the ProSEDS project continued through the summer of 2003 regarding the appropriate starting altitude for the mission. Due to the combination of a drastically reduced starting altitude and a launch timeframe during a period of solar minimum, the electrodynamic propulsion performance of the ProSEDS system was no longer sufficient to meet the mission objectives. Given this and other factors, the ProSEDS project was officially terminated in October of 2003.