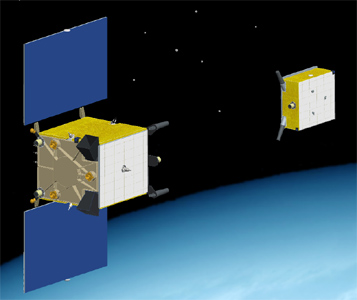 PRISMA (Prototype Research Instruments and Space Mission technology Advancement) consists of two space vehicles, the Main spacecraft and a simpler Target craft that will meet in space. The Main spacecraft can manoeuvre while the role of the Target is just what is in its name.

The Main craft will weigh about 140 kg and the target about 40 kg. They were launched together as one unit and the Target craft separated after about two weeks in orbit when the technology demonstration commences.

The PRISMA Rendezvous Robot composite was launched on a Dnepr rocket in 2010 as a piggyback passenger with other spacecraft. The intended orbit is a sun-synchronous dawn/dusk orbit at about 600 km altitude. The PRISMA demonstration phase is intended to last about 8 months. Satellite control will be performed from SSC's Esrange ground station while mission planning and evaluation will be carried out from SSC's space engineering centre in Solna outside Stockholm. Operations will be highly automated and experimenters in various space organisations will monitor and control their equipment from their home bases via the Internet. Total program costs excluding the onboard equipment supplied by the partners from other countries than Sweden but including spacecraft development launch and operations is 20-23 million euros.