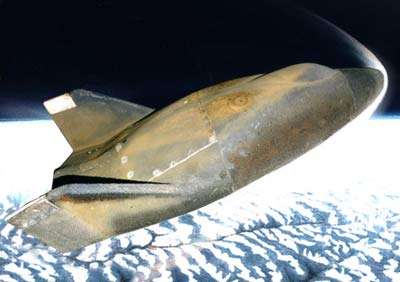 The Martin X-23 PRIME (Precision Recovery Including Maneuvering Entry) was a small uncrewed lifting body re-entry vehicle tested by the United States Air Force in the late 1960s. Unlike ASSET, primarily used for structural and heating research, the X-23 PRIME was developed to study the effects of maneuvering during re-entry of Earth's atmosphere, including cross-range maneuvers up to 1143 km off of the ballistic track.

The structure of the X-23 was built from titanium, beryllium, stainless steel, and aluminium. It consisted of two sections: the aft main structure and a removable forward "glove section." The body of the X-23 was completely covered with a Martin-developed ablative heat shield 20 to 70 mm thick, and the nose cap was constructed of carbon phenolic material.

Aerodynamic control was provided by a pair of 30 cm square lower flaps, and fixed upper flaps and rudders. A nitrogen gas reaction control system was used outside the atmosphere. At Mach 2 a drogue ballute deployed and slowed the vehicle's descent. As it deployed, its cable sliced the upper structure of the main equipment bay, allowing a 16.4 m recovery chute to deploy. It was to be recovered in midair by a specially-equipped JC-130B Hercules aircraft.

All missions were launched on Atlas-SLV3 boosters from Vandenberg AFB.

PRIME 1 was launched on 21 December 1966 on a mission to simulate a low-earth orbit reentry with a zero cross-range. The ballute deployed at 30.43 km, though the recovery parachute failed to completely deploy. The vehicle crashed into the Pacific Ocean and was not recovered.

PRIME 2 was launched on 5 March 1967. This flight simulated a 1053 km cross range re-entry, and banking at hypersonic speeds. Several stringers on the main parachute failed to cut which lead to the loss of the vehicle.

PRIME 3 mission was flown on 19 April 1967 and simulated reentry from low-earth orbit with a 1143 km cross-range. This time, all systems performed perfectly, and the X-23 was successfully recovered. An inspection by a USAF-Martin team reported the craft to be reusable although no later missions were carried out. PRIME 3 is now on display at the National Museum of the United States Air Force at Wright-Patterson Air Force Base in Ohio.

A fourth PRIME mission was cancelled and the launch vehicle was converted to a Atlas-SLV3 Burner-2 configuration.