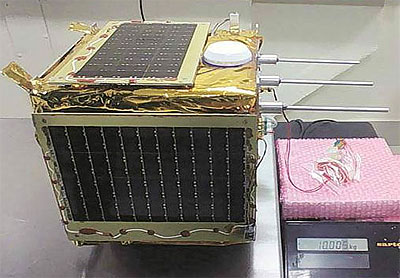 Pratham is a nanosatellite built by the Department of Aerospace Engineering at IIT Bombay.

Pratham is a satellite developed under a plan to build a fully functional microsatellite in less than three years which would then be launched by Indian Space Research Organisation (ISRO). It is entirely a student initiative with mentorship provided by ISRO scientists and the IIT Bombay Faculty.

Pratham was launched piggy back into low Earth on a PSLV-G (3) rocket. Reportedly the groundstation received the satellites beacon, but not the downlink. The microsatellite needed both the beacon and downlink signals to start TEC measurements. In the absence of either signal, TEC measurement was not successful.