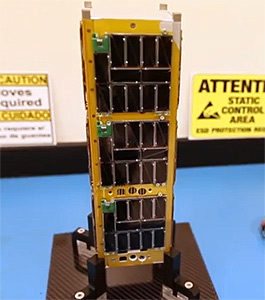 The PR_CuNaR 2 (Puerto Rico CubeSat NanoRocks-2) is a 3U CubeSat scientific investigation by the Universidad Interamericana de Puerto Rico, Bayamon, to increase understanding of the outcomes of relevant collisions among millimeter-sized particles, or pebbles, in a protoplanetary disk.

The experiment will take advantage of the long duration and high quality of microgravity provided by a CubeSat in Low-Earth-Orbit (LEO) to obtain a large sample of collisional outcomes at very low velocities (<10 cm/s). The experiment consists of nine chambers containing different populations of particles that are mechanically shaken to induce collisions between the particles. Video of the collisions will indicate the collision parameters (mass, density and composition of particles, and collision velocities) that lead to sticking, rebound, and fragmentation of aggregates. In the case of rebounds, the coefficient of restitution (a measure of the dissipation of energy) will be measured.

Upon deployment from the dispenser, PR-CuNaR2 starts counting down a 30 minutes timer and then will power up the Motherboard. Next, the passive control system begins to actuate. After stabilizing the CubeSat, the vibrating motor is turned on for 15 seconds then stops. After 45 seconds of pausing the motor, the particles will continue to move and then the camera board and the backlights will activate to record the collisions. The program of the camera is executed for 5 minutes and then proceeds to store the video and processes it to be sent by radio. The CubeSat then enters charging mode. After the launch, the radio will be powered on in receive mode only. As the satellite flies over a ground station, the station will continuously beacon towards the satellite. When the satellite radio hears the beacon, along with the proper serial number code, it will respond, and a link will be established. At that point, the ground station will ask the satellite for information, typically payload data or onboard telemetry. The satellite will respond by downlinking the requested information. When the link is lost due to the satellite passing out of view and the satellite was transmitting, the satellite will try up to 3 seconds to complete the last packet transmitted. The satellite will then revert to a passive receive mode and wait for the next beacon froma ground station.

It was selected in 2018 by NASA's CubeSat Launch Initiative (CSLI) to be launched as part of the ELaNa program. It was launched in August 2021 onboard of Dragon CRS-23 to the ISS, where it was deployed on 12 October 2021.