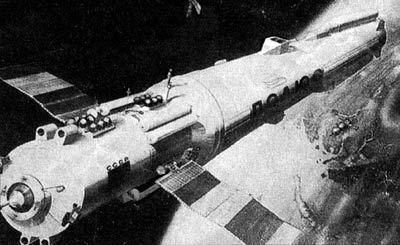 Polyus, aka Skif-DM, was a test article to test several technologies for the Skif-D laser satellite, a soviet 'SDI' program. This vehicle was based on the TKS tug, which was to perform orbital insertion, and featured a large experimental section, which contained a recoilless subsatellite launcher, laser and radar targeting systems and an unspecified number of subsatellites to calibrate these systems.

The active docking system depicted on illustrations might have been a relict from the TKS program, which might just have been left in place. It is very unlikely, that the Polyuz was to have performed an active docking maneuvre.

Due to an guidance error caused by a programming error, the TKS tug could not orient the Polyus stack correctly to put itself into orbit. It was the heaviest satellite built ever.