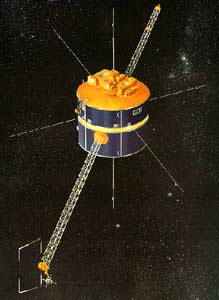 Polar is one of four spacecraft in the Global Geospace Science (GGS) program. These are among the spacecraft (Wind, Geotail, SOHO, and Cluster) in the International Solar Terrestrial Physics (ISTP) program. POLAR measures solar wind entry, ionospheric output, and the depositions of energy into the neutral atmosphere at high latitudes.

Imaging instruments make possible the measurement of visible, ultraviolet, and X-ray spectra of the polar caps. POLAR has on-board propulsion systems and a design lifetime of three to five years, with redundant subsystems. POLAR is cylindrical, approximately 2.8 m in diameter by 1.25 m high (plus 1.25 m for its two despun platforms), with body-mounted solar cells, weighs 1250 kg and uses 333 W of power. The spin rate is 10 rpm around an axis approximately normal to the orbital plane. It has long wire spin-plane antennas, inertial booms, and spin-plane appendages to support sensors. POLAR has two despun gimballed instrument platforms, and booms are deployed along both Z axes. Data are stored using on-board tape recorders and are relayed to the Deep Space Network at a high rate (600 kbps maximum, 250 kbps nominal), although the average real-time data rate for POLAR is 41.6 kbps. POLAR is placed in a 22.6-h polar orbit (90 deg inclination), with perigee and apogee of 11,500 and 57,000 km.

Following instruments were on board the spacecraft:

Polar was decommissioned in April 2008 after 12 years of service.