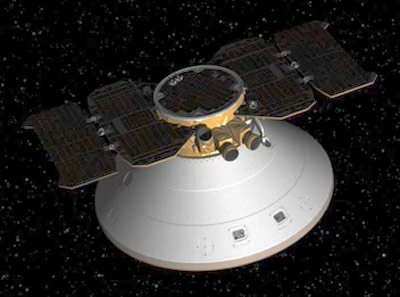 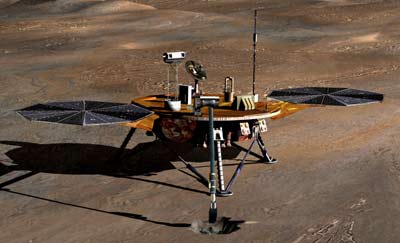 The Phoenix Mars lander is a probe to examine the water-ice-rich northern polar region, dig with a robotic arm into arctic terrain for clues on the history of water, and search for environments suitable for microbes.

NASA announced that it has selected the University of Arizona "Phoenix" mission for launch in 2007 as what is hoped will be the first in a new line of smaller competed "Scout" missions in the agency's Mars Exploration Program.

Dr. Peter H. Smith of the University of Arizona Lunar and Planetary Laboratory heads the Phoenix mission, named for the mythological bird that is repeatedly reborn of ashes. The $325 million NASA award is more than six times larger than any other single research grant in University of Arizona history.

Phoenix is a partnership of universities, NASA centers, and the aerospace industry. The science instruments and operations will be a University of Arizona responsibility. NASA's Jet Propulsion Laboratory in Pasadena, Calif., will manage the project and provide mission design. Lockheed Martin Space Systems, Denver, will build and test the spacecraft. Canadian partners will provide the meteorological instrumentation, including an innovative laser-based sensor.

The lander for Phoenix was built and was being tested to fly as part of the 2001 Mars Surveyor Program, but the program was cancelled after the Mars Polar Lander was lost upon landing near Mars' south pole in December 1999. Since then, the 2001 lander has been stored in a clean room at Lockheed Martin in Denver, managed by NASA's new Mars Exploration Program as a flight asset.

Renamed Phoenix, it will carry improved versions of University of Arizona panoramic cameras and volatiles-analysis instrument from the ill-fated Mars Polar Lander, as well as experiments that had been built for the 2001 Mars Surveyor Program, including a JPL trench-digging robot arm and a chemistry-microscopy instrument. The science payload also includes a descent imager and a suite of meteorological instruments.

The mission has two goals. One is to study the geologic history of water, the key to unlocking the story of past climate change. Two is to search for evidence of a habitable zone that may exist in the ice-soil boundary, the "biological paydirt."

The Phoenix robotic arm will scoop up martian soil samples and deliver them for heating into tiny ovens of the volatiles-analysis instrument so team members can measure how much water vapor and carbon dioxide gas are given off, how much water ice the samples contain, and what minerals are present that may have formed during a wetter, warmer past climate. The instrument, called thermal evolved gas analyzer, will also measure any organic volatiles.

Using another instrument, researchers will examine soil particles as small as 16 microns across. They will measure electrical and thermal conductivity of soil particles using a probe on the robotic arm scoop.

The instruments onboard are: