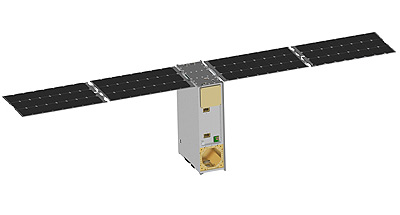 PetitSat (Plasma Enhancements in The Ionosphere-Thermosphere Satellite) is a 6U CubeSat mission developed by NASA's Goddard Space Flight Center to study density irregularities in the mid and low-latitude ionosphere as a precursor to a possible Explorer-class mission.

The mission will study density irregularities in the mid and low-latitude ionosphere, which occupies a tiny fraction of the atmosphere and is basically an ionized layer coexisting with the thermosphere roughly 50 to 250 miles above Earths surface. The ionosphere is a plasma, an ionized gas consisting of positive ions and free electrons. It is important to long-distance radio communication because it reflects radio waves back to Earth. Consequently, any perturbations in the density of the plasma interfere with GPS and radar signals. These perturbations or irregularities come in the form of ionospheric depletions or bubbles, structures that contain fewer electrons, and enhancements or blobs that contain a greater number of electrons. All these irregularities can distort the transmission of radio waves.

The 6U CubeSat is to be based on the Dellingr design. It will feature two instruments:

It was selected in 2019 by NASA's CubeSat Launch Initiative (CSLI) to be launched as part of the ELaNa program. The satellite is to be deployed from there International Space Station (ISS) in 2021.