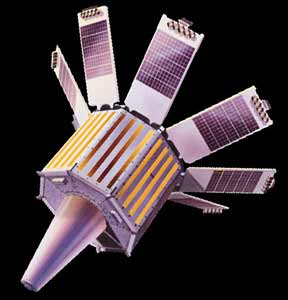 Péole (Preliminaire Eole) was the first French experimental data relay satellite for meteorological data and the first launched by the Centre National d'Etudes Spatiales (CNES) from the Centre Spatial Guyanais near Kourou, French Guiana. The satellite was placed into a near-circular, near-equatorial orbit. Launched before the initiation of France's operational meteorological satellite program, Péole was designed to test the feasibility of acquiring data, including wind velocity, by reception of telemetry and tracking data from independent earth-circling, constant-altitude, and meteorological balloons. Qualifying tests were made of a gravity-gradient stabilization and attitude system, onboard engineering, and meteorological experimental equipment that were later used on the Eole meteorological satellite. In addition, studies were made of the effects of the space radiation environment on solar cells composed of thin layers of cadmium sulfide and cadmium telluride. The satellite was in the form of a regular octahedron 0.70 m across opposite corners and 0.55 m long with eight solar panels containing 5920 solar cells, which were deployed 45 deg from the spacecraft's upper octagonal structure after orbital insertion. A 136.350 MHz (1-W) command receiver handled the command and programming telemetry. The satellite-balloon and satellite-earth interrogation systems were tested with a 400.190 MHz (4-W) transmitter that operated through an earth-oriented canted turnstile antenna mounted on the satellite base. Péole was a success, and nearly all of its systems were incorporated into the design of Eole.