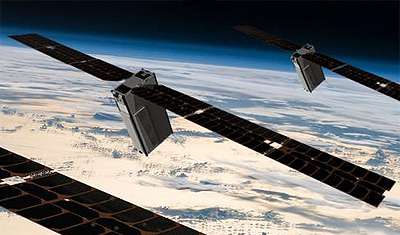 The Pearl 8U CubeSats are communications satellites for Sky and Space Global's 200 Satellite LEO constellation.

Sky and Space Global is planning a network of nanosatellites for narrowband communications that it expects will cost $160 million or less to complete in total. The company, located in the U.K., Israel and Australia, has fully funded the first three Diamonds satellites to precede an initial constellation of 200 nanosatellites. The initial constellation will focus on equatorial coverage from 15 degrees south latitude to 15 degrees north. Each Pearl nanosatellite has a lifespan of about seven years, with 25 per cent of the network to be replaced each year.

The satellites are being built by GOMSpace on an unusual 8U (2×4U) CubeSat form factor.

For the constellation, Sky and Space Global has contracted four launches of Virgin Galctics LauncherOne with an unspecified number of satellites into a low inclination orbit.

The company has raised money to facilitate the deployment of 20 Pearl nanosatellites. In September 2019 the production and launch of the Pearls were cancelled. Sky and Space Global is now planning a smaller constellation. In December 2019, the company announced, that the initial focus is to get eight satellites into orbit.