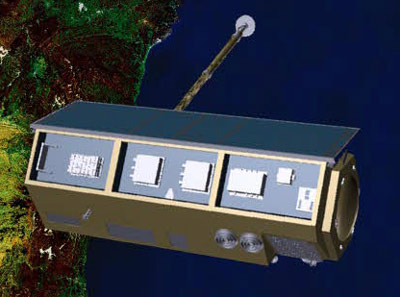 Paz is one component of the Spanish National Earth Observation Programme. The budget for the Paz satellite is estimated at 160 million, and covers the flight and ground segments, as well as the launch. The Spanish Ministry of Defence will provide 135 million of the funding, whilst the company Hisdesat will finance the rest.

Given that the satellite will be used for multiple applications in the field of security and defence, and could have potential civil applications, its image acquisition functions will be extremely diverse.

The industrial framework is as follows:

The satellite will be capable of providing images in any type of weather conditions, day and night, and will primarily fulfil the security and defence needs of the Spanish government.

The Paz satellite will be equipped with an X-band synthetic aperture radar (SAR) instrument, mounted on a TerraSAR-X recurrent platform, a hexagonal carbon-fibre structure. The TerraSAR-X platform will be provided by Astrium GmbH. The instruments radar antenna will incorporate printed-radiator technology developed by Astrium at its Madrid-Barajas site which has already been successfully used on other programs such as Envisat, Spainsat, Inmarsat and Galileo.

The estimated mass of the satellite will be 1,200 kg, and its solar array will generate power of 850 W. The instruments printed-radiator planar phased-array radar will be 4.8 m long and 0.7 m wide. It will be designed to offer different modes of operation, with different swath widths, and various resolutions of up to a meter.

As satellite prime contractor, Astrium España is responsible for the systems engineering, as well as satellite integration and testing activities, satellite validation, and placing into orbit in a fully operational state.

Among a whole host of other applications, the geo-information services to be provided by the mission will be used to enhance surveillance of Spanish territory and other parts of the globe, control of Spanish borders, operational capability of the Spanish armed forces, evaluation of natural disasters, and risk and crisis management.

Launch of the satellite is scheduled for 2012. Paz will then circle the Earth 15 times a day in a sun-synchronous polar orbit, at an altitude of 505 km. From this position, the satellite will be able to supply an average of 200 images a day, and to cover an area of around 300,000 km².

It has been indicated that the satellite will also be used, for example, in the fight against piracy in the waters off Somalia  where a Spanish fishing boat was hijacked last summer  or for the monitoring and control of the illegal traffic of immigrants in Spanish waters. The operator Hisdesat has also stated that the satellite will provide services to Spanish embassies, the Ministry of the Interior, the ocean research vessel Hespérides, and to various other countries such as the United States, Mexico, Belgium and Denmark.

Additionally, the satellite carries an AIS-receiver for exactEarth (COMDEV), which is known as exactView 8 (EV 8).

The Paz satellite, owned by the operator Hisdesat, will be located in the same orbit of TerraSAR-X and TanDEM-X, the observation satellites from Airbus Defence & Space. The three satellites, virtually identical, operating in a constellation, providing data to customers more flexibly and effectively with a wide range of advantages like reduced revisit times.

Originally Kosmotras was contracted to provide the Dnepr launch vehicle for a launch from Dombarovsky (Yasny) in 2015. After an 18 months delay, Hisdesat cancelled the launch contract in July 2016. Launch on a not yet disclosed vehicle is planned for 2017. In early 2017, a shared launch on a SpaceX Falcon-9 v1.2 in late 2017 or 2018 was announced.