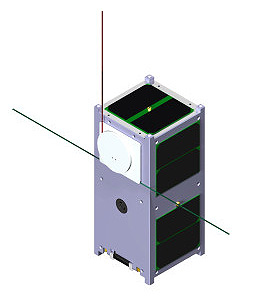 Parikshit is a 2U-cubesat built by the Manipal Institute of Technology.

The 2 kg nanosatellite has two mission objectives: to observe the earth in the long wave infrared region band and to test a electrodynmic tether device to deorbit the satellite.

The first and primary payload is thermal imaging. Parikshit will take pictures of earth in the long wave infrared region band. This corresponds to the wavelength range of 7.5 to 13.5 microns. The region of interest will be the indian subcontinent. The device used for this purpose is an uncooled microbolometer thermal camera supplied by FLIR Inc.

The proposed applications for this payload are:

The secondary payload, which shall be activated only after the mission life ends, is an Electrodynamic Tether for the purpose of deorbiting of the satellite. This is an experimental payload which would demonstrate successful removal of space junk and thus avoid accumulation of debris. An electro-dynamic tether consists of a conducting wire, dragged through a magnetic field. This will induce voltage across the tether, with positive at high end, and thus try to drive a current up the tether. This results in a drag force against the direction of propogation due to which the satellite will lose its altitude. Gradually it would enter the atmosphere and finally burn up. The material for the tether is Aracon. This tether will be deployed from the Satellite using a spring mechanism after the satellite's prime mission ends.

Parikshit will be launched piggy back into low Earth on a PSLV rocket.