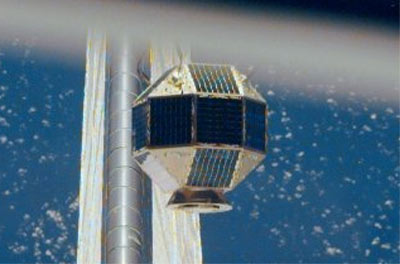 The PANSAT (Petite Amateur Navy Satellite) was a small satellite designed and built by officer students, faculty, and staff at the Naval Postgraduate School (NPS). The main objective was to support the Space Systems and Engineering and Space Systems Operations curricula by providing a "hands-on" hardware project where exposure to the many facets of a space system development and life cycle could be experienced. PANSAT provided educational training while in orbit through a space-based laboratory for officer students at NPS.

PANSAT was launched from the Shuttle into a low-Earth orbit on the STS-95 Discovery mission as part of the third International Extreme Ultraviolet Hitchhiker (IEH-3) experiment. The spacecraft provided store-and-forward (packet radio) digital communications using direct sequence spread spectrum modulation. PANSAT operated in the amateur radio 70 cm band with center frequency at 436.5 MHz, a bit rate of 9842 bits per second and 9 MB of message storage. Amateur radio ground stations were able to utilize PANSAT via a bulletin-board type user interface.