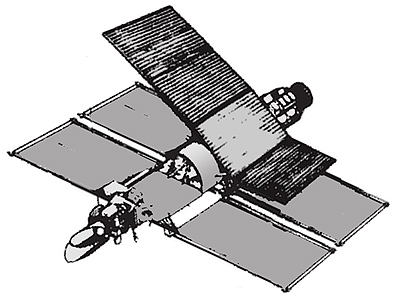 The Space Test Program P80-2 spacecraft was to be an Ascent Agena (similar to SEASAT) which is modified to carry orbital experiments on the forward structure. High electric power requirements are met by four flexible roll-out solar array panels which extend from the Agena. The twilight sun-synchronous orbit allows deployment of the array perpendicular to the insolation vector. Experiment data may be read out by ground stations or may be recorded for subsequent transmission to the ground stations. The investigations will test a deep-space-viewing infrared telescope with active cryogenic refrigeration, and measure solar flare isotopic composition.

P80-2 would have featured two prime payloads and a secondary payload:

P80-2 would have been launched by an Atlas-F Agena-D launch vehicle from Vandenberg Air Force Base, but was cancelled due to a 19 million USD cost overrun in spacecraft integration. The SIRE instrument was then planned to be flown as an attached (sortie) payload on the Space Shuttle, but was eventually cancelled.