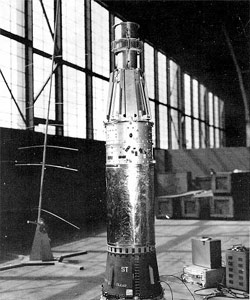 P-21 and P-21A were two suborbital ionospheric probes, which measured the conditions of the ionosphere during day and night time.

The P-21 spacecraft was in the shape of a frustrum of an octagonal right pyramid. The maximum octagonal chord was about 52.5 cm, and frustrum altitude was 96.5 cm. It featured a Continuous Wave Propagation and a Radio Frequency Probe. Two dipole (73 MHz and 12 MHz antennas extended at right angles to each other and to the pyramid axis, from near the top of the frustrum. The vehicle was permanently affixed to the 4th stage of the launch vehicle. The spacecraft was battery powered to provide operation during the entire 1-1/2 hr flight, which reached 6800 km apogee and returned. The flight path was southeast across the Atlantic ocean. This spacecraft launch was a piggy pack on the 7th Scout-X1 test vehicle (ST-7) so the primary mission was vehicle teSt, and the subordinate scientific mission was determination of electron density as a function of height. The spacecraft was spin stabilized at about 1 rps. This flight was planned as a probe and flew for about 90 min.

The P-21A was a suborbital probe designed to collect nighttime ionospheric data needed to improve Earth-space communications. It carried a continuous-wave propagation experiment to study electron density and associated parameters of the ionosphere; a swept-frequency probe to make measurements of electron density; and an ion trap to determine positive ion concentration. The spacecraft was an 8-sided cone which contained the experiments and transmitters. It was launched on a Scout-X2 (ST-9) and flew to 6291 km altitude and 7040 km downrange from Wallops Station, Virginia in a 97 minute flight. P-21A returned good data on nighttime ionosphere conditions. It described the newly discovered helium layer under nighttime conditions for the first time.