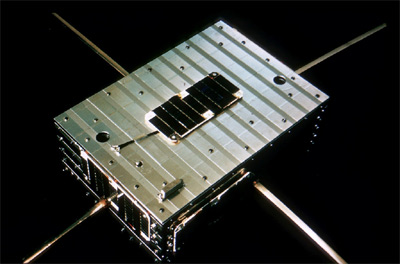 The OSCAR 3 (Orbiting Satellite Carrying Amateur Radio 3) was the third amateur radio satellite and the fisr one to relay voice transmissions.

The 16.3 kg rectangular spacecraft measured 20×30 cm with four monopole antennae. It contained a tracking beacon transmitter and a communications repeater. No active attitude control system was employed, and power was furnished by onboard batteries and solar cells.

It was launched piggyback with seven United States Air Force satellites. It was the first amateur satellite to operate from solar power and relay signals from Earth. OSCAR 3 was the first true amateur satellite relaying voice contacts in the VHF 2 meter band through a 1 W 50 kHz wide linear transponder (146 MHz uplink and 144 MHz downlink).