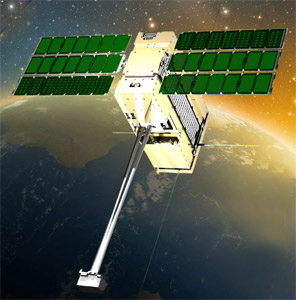 The ORS Squared (ORS2) nanosatellite mission is to evaluate a small spacecraft platform to support a wide variety of programs of particular significance to the Operationally Responsive Space office (ORS). The primary mission for ORS2 is to measure and record vibration and shock data during the launch.

An additional task is the demonstration of the reliability and robustness of the Space Plug-and-play Architecture (SPA) in a space environment. It is also the first flight of a new solar array system called the High Watts per Kilogram (HaWK) system. HaWK, manufactured by MMA Designs, is designed to provide a spacecraft with sufficient power to accomplish space weather experiments during a low-earth-orbit (LEO) mission. Among these experiments are a magnetometer, mounted on the end of a boom which extends one meter from the side of the spacecraft to measure the earths magnetic field, and a dosimeter which will perform radiation measurements throughout the mission.

The spacecraft is built to the 6U CubeSat form factor. It will be deployed using a new Canisterized Satellite Dispenser (CSD), manufactured by Planetary Systems Corporation. The CSD is designed to easily adapt to any space delivery platform and to reliably deliver approximately 6 kg of spacecraft into orbit.

The satellite was selected for launch via NASA's ELaNa program. The launch of the ORS2 satellite was originally planned for the maiden launch of the Super-Strypi rocket, but was dropped from the manifest shortly before planned payload delivery and was postponed indefinitely.