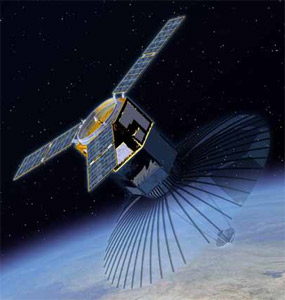 ORS 2 (Operationally Responsive Space 2) is the first radar satellite of the ORS program.

The goal of the ORS Office is to develop the capability to rapidly reconfigure, launch, and operate space vehicles in a matter of days.

ORS 2 consists of a bus called Modular Space Vehicle (MSV), that employs a Modular Open System Architecture, using Plug-n-Play technology to allow for rapid manufacturing, integration and testing, and a radar surveillance payload. The satellite is baselined for a Minotaur-1 launch.

Northrop Grumman Aerospace Systems of Redondo Beach, Calif., is the prime contractor for MSV and Sierra Nevada Corp. of Sparks, Nev., is the payload provider.

ORS 2 was planned for a launch in 2015, but was not fully funded. Funds were available for the mission are sufficient to complete the MSV satellite bus, which was delivered in 2014, and to test it with the payload. It has since been put into storage and the MSV bus is planned to be launched with another payload. The MSV bus will be slightly modified and fitted with the ORS-6 (COWVR) (Compact Ocean Wind Vector Radiometer) instead of the radar payload and is to be launched in 2017.