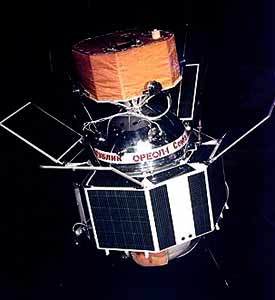 The Oreol 1 and 2 or Aureole 1 and 2 satellites were a joint Soviet-French science mission called ARCAD (Arctic Aurora Density) to investigate physical phenomena in the Earth's upper atmosphere at high latitudes and to study of the nature of auroras.

The satellite were built by Yuzhnoye based on their DS-U2 satellite bus and featured both Soviet and French science instruments.

Oreol 1 or Aureole 1 was launched on 27 December 1971 on a Kosmos-3M rocket from the Plesetsk cosmodrome.

The second satellite to continue the measurements, Oreol 2 or Aureole 2 was launched two years later on 26 December 1973 also on a Kosmos-3M rocket from the Plesetsk cosmodrome.