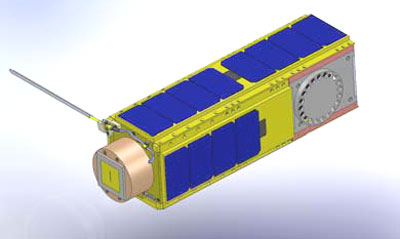 The mission concept is a 5.2 kg (max) free-flying spacecraft launched as a secondary (or piggyback) payload. The target launch is the USAF STP S26 mission from Kodiak Island on a Minotaur IV expendable launch vehicle (Dec. 2009). The orbit will be a circular low Earth orbit (LEO) of 650 km altitude at 72 degrees inclination, with an orbital period of 97.7 minutes. Satellite attitude dynamics in orbit are controlled by permanent magnets and hysteresis rods that dampen rotational energy. The satellite rotates about its long axis (z-axis) at a rate ranging from 1 to 2 RPM. The satellite also experiences a nutation, or “coning”, rotation about it center of mass at a rate of 4-5 RPM with a cone half-angle of less than 13 degrees. This spacecraft motion results in a microgravity environment that varies, but remains below 100 micro-g.

Radiation dose rate on the spacecraft from the inner Van Allen belts and GCR can be as much as 1.4E3 Rads/day. Of this, GCR is expected to make up about 50 mRad/day. Orbit thermal environment varies over time with orbit plane precession (-2.19 degrees per day) and variation in the sun angle (ecliptic plane) during the year.

The O/OREOS satellite project will develop a simple deployable drag device to assist the satellite with achieving natural orbit decay in less than 25 years. The device simply increases the surface area of the satellite by extending mylar panels. This results in a surface to mass ratio sufficient to achieve the required deorbit. No propellants are required.