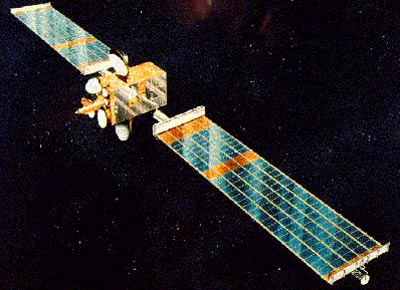 Built by British Aerospace for ESA, Olympus 1 measured 2.9 by 2.7 by 5.5 m. Solar arrays, spanning 25.6 m, provided 3.6 kW of power. It had a 5-year design life. The Olympus bus was designed to handle double the power, mass and service life requirements on future missions. A single burn of its bipropellant liquid apogee engine gave the satellite a soft ride towards its assigned station at 19 deg. w, where it arrived on August 3.

In January 1991 the south solar panel stopped tracking the sun, which reduced available power to about 1.8 kW. On 29. May 1991 a problem with an attitude control appeared and due to some incorrect commands to correct the problem uplinked from Fucino Earth Station Italy the satellite started tumbling, and drifted off station. Finally on 19. June 1992 the Darmstadt Control Centre regained control of Olympus, but not before the satellite had completely drifted around the Earth. The manoevers used up a lot of the station keeping fuel, but Olympus was put back into service at 19°W on 7. August 1992.

On 12. August 1993, control was lost again after an impact with a meteor from the annual Perseid meteor shower. Olympus started spinning. The attempt to stabilize the craft used up most of the remaining propellant, leaving an insufficient ammount for further operation. With the remaining fuel, Olympus was sent to a graveyard orbit and finally decomissioned on 12. August 1993.