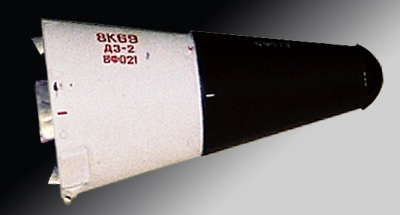 OGCh (Orbital'noy Golovnoy Chasti) was an attempt to create an orbital warhead to circumvent the US ballistic missile early warning radars. It consisted of a conical reentry vehicle and an maneuvering stage. The manuevering unit, which oriented the spacecraft in orbit and autonomously determined when to make the braking manoeuvre to bring the re-entry vehicle down from orbit. It included an inertial navigation system and a radar altimeter which measured the altitude of the orbit and determined when to make the braking manoeuvre. The retro-rocket engine was a single chamber engine, the Yangel RD-854, with a vacuum thrust of 7.7 tons. Four nozzles on the sides of the main engine (using exhaust gases from the main engine) provided steering capability. Four additional tangentially located nozzles provided yaw capability. Each nozzle was throttleable. A solid fuel cartridge then spun up the turbine assembly of the liquid propellant (N2O4/UDMH) braking engine.

Although an orbital flight reduced the payload mass and reduced accuracy in comparison to ballistic ICBMs, it was considered an advantage to have nuclear weapons, which could attack every target from every direction. Originally to be launched by the GR-1 missile, it was redesigned for the R-36-O missile. After several suborbital tests, the USSR flew a number in fractional orbits - i.e. orbital velocity was reached, but the vehicle was deorbited before completing an orbit. The warheads impacted at the Kapustin Yar missile range.

The system was in service at 18 silos at Baikonur from 25 August 1969 to January 1983. Under SALT-2 the system was deactivated. The OGCh missile had a 7.5 year guaranteed fuelled storage life and a five minute reaction time.