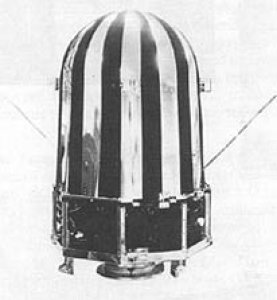 The OFO 1 (Orbiting Frog Otolith) satellite was a small life-science satellite instrumented to obtain the first direct recordings of otolith response during prolonged periods of weightlessness. In-dwelling microelectrodes were implanted in the vestibular nerves of two bullfrogs (Rana calestiana) to measure the bioelectric action potential in the animals during weightlessness and during repeated simulated gravity stimulus obtained by activation of a small centrifuge.

The primary data obtained include

The instrumentation for the experiment was contained in a biopackage configured to assure survival and normal function of the two frogs for the duration of the experiment. Data were telemetered to ground stations.

The Frog Otolith Experiment Package (FOEP) contained all apparatus necessary to assure survival of two frogs. Specimens were housed in a water-filled, self-contained centrifuge which supplied the test acceleration during orbit. The FOEP was designed for flight as part of the Apollo Applications Program; however, the package was equipped for flight on an uncrewed spacecraft.

The recovery of the animals was not planned and the frogs died during the spaceflight. The OFO experiment continued until the seventh day in orbit, at which time the onboard battery failed.