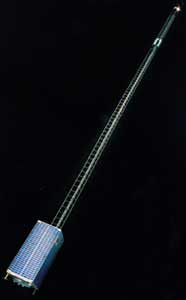 The Ørsted (Oersted) spacecraft was named after the Danish physicist Hans Christian Ørsted (1771-1851), who discovered electromagnetism in 1820. The spacecraft primary science objectives were to perform highly accurate and sensitive measurements of the geomagnetic field and to perform global monitoring of the high energy charged particle environment.

The instrumentation consisted of two magnetometers (proton precession and fluxgate), a star imager for attitude determination, a solid-state charged particle detector package, and a GPS receiver. The Science Instrument Team is responsible for the design of the instruments, while the Science Team is responsible for the science mission planning and international science participation. The science data obtained during the planned one-year mission will be used to derive an updated model of the geomagnetic field and its secular variation and to study the magnetospheric field-aligned currents and their relationship to ionospheric and solar wind conditions.

The principal research topics are in two areas:

To utilize the Oersted science data return, the plan is to establish an internationally recognized research environment in the field of solar-terrestrial physics, a Solar-Terrestrial Physics Laboratory, comprising magnetospheric, ionospheric, and atmospheric physics in combination with research in the magnetic field of the earth. Correlative studies will be carried out using observations from existing monitoring stations in Greenland and other polar regions.

The spacecraft was launched as an auxiliary payload into a near-sun synchronous elliptical polar orbit, with inclination about 96 degrees, perigee/apogee of about 630 / 850 km, and nodal drift rate 0.76 degree/day. It is gravity-gradient stabilized, with its extendable 8-m boom aligned to and pointing away from the center of the earth. Active attitude control is achieved using three-axis magnetic torqueing coils. The data system features on-board monitoring and pre-processing. Data is stored in a 16-Mbyte on-board memory and downlinked in packetized format when a ground station is in view.