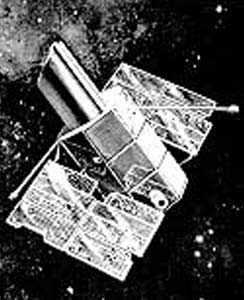 OAO B (Orbiting Astronomical Observatory B) was one of a series of automated astromonical observatories which were ground controlled in orientation and were placed in a low earth orbit.

The experiments gathered for the unsuccessful OAO-B were called the Goddard Experiments Package, after rocket pioneer Robert Goddard. This spacecraft carried a moderate resolution scanning spectrometer system using a relatively fast 38-in. cassegrain telescope to determine composition and properites of early (types A and B) stars, as well as properties of variable stars and peculiar B stars using absolute spectrophotometric data (1000-4000 Å with 2 Å resolution). Optical system was to use a relatively fast 36 inch cassegrain telescope with a large aperture spectrophotometer. Six photomultipliers were to be used in a pulse-counting mode for data recovery.

This mission failed when the payload shroud of the Atlas-SLV3C Centaur-D rocket failed to separate.