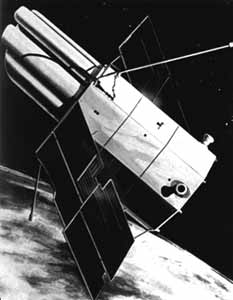 OAO 3 (Orbiting Astronomical Observatory), also known as Copernicus, was the third in the OAO program and its second successful spacecraft to observe the celestial sphere from above the earth's atmosphere. A UV telescope with a spectrometer measured high-resolution spectra of stars, galaxies, and planets with the main emphasis on the determination of interstellar absorption lines. Three X-ray telescopes and a collimated proportional counter provided measurements of celestial X-ray sources and interstellar absorption between 1 and 100 A.

The OAO 3 spacecraft was an octagonally shaped aluminum structure with a 1.21 m hollow central tubular area, which housed the experiment container. Solar panels were mounted on each side of the spacecraft at angles of 34 degrees and had an area of 38.2 square m. A sun baffle protected the experiments and increased the length of the spacecraft to 4.9 m. Two inertial balance booms, one forward and one aft, extended approximately 6.8 m.

The spacecraft was equipped with an inertial reference unit (a high-precision three-axis gyro inertial system), sun sensors, a magnetometer, and star trackers, which enabled spacecraft pointing to be determined in many different ways. A boresight star tracker, sensitive to sixth magnitude, controlled pitch and yaw to within 5 arc-s. In addition, the high-resolution telescope experiment had a fine pointing control, which could control the pitch and yaw to within 0.1 arc-s on bright stars. Spacecraft attitude was controlled by inertia wheels and thrusters.

Redundant tracking beacons facilitated ground tracking of the spacecraft. Two UHF (400.55 MHz) transmitters provided wideband telemetry for transmitting digital data to the ground stations. Two redundant VHF (136.26 MHz) transmitters were used in a narrow-band telemetry link primarily for transmitting spacecraft housekeeping data, although they served as backups for the wideband telemetry system. Two redundant pairs of VHF command receivers were carried as part of command system capable of storing 1280 commands. Data were stored on an onboard tape recorder and in core storage. An onboard processor monitored telemetry data, issued commands, and was programmed via the command receiver uplink.