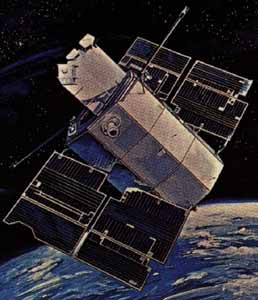 OAO 2 (Orbiting Astronomical Observatory), also known as Stargazer, was one of a series of automated astronomical observatories that was ground controllable in orientation and was placed in a low-earth orbit.

This spacecraft carried two experiment packages, which were located centrally within the spacecraft, each viewing space from opposite ends. One experiment, the Wisconsin experiment package (WEP), consisted of four stellar photometers (1000 to 4250 A), two scanning spectrometers (1000 to 4000 A), and one nebular photometer (2000 to 3300 A). The other package, Celescope, consisted of four independent telescopic Schwarzschild cameras (1200 to 2900 A).

Built in an octahedron shape, 10 ft by 7 ft, the satellite weighed 4400 pounds. The design was dictated by the stringent requirement of the experiments for pointing accuracy, pointing stability, command capability, data handling, and thermal environment, and by the constraints of the orbit for ground-station contacts. Six two-gimbal star trackers were programmed by the onboard memory to acquire and track appropriate guide stars. Error signals were generated that drove the reaction wheels to obtain stellar stabilization. Coarse momentum wheels were used for slewing the spaecraft. Memories permitted storage of 200,000 bits of experimental data. All information was relayed to the central control station in Greenbelt, MD.